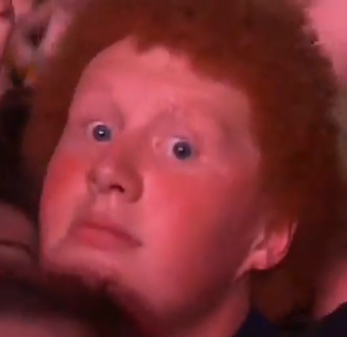 Part of my “job” as a domainer is to keep up with the latest trends and happenings on the Internet. Every once in a while one little thing becomes one big thing and an Internet meme is created. There are often opportunities to create quick websites or fan sites and draw a HUGE amount of traffic. Some evolve and take on a life of their own and have staying power. Most last a few weeks or months and then die off. Here’s the latest that everyone seems to be having a laugh with.

Eminem gave a concert at ‘T in the Park”. T is Scotland’s biggest music festival and this year had over 85,000 attendees and was hailed as a big success.  New group La Roux was big hit and so was Eminem (although he appeared to be lip syncing) In all this great music and concert footage there seemed to be one constant.   A red haired kid with a redfro seemed to be in a lot of the footage.  Not a big deal normally but this kid really stands out.  Check out minute 1:15 here.  It’s quick but it almost seemed like he was dubbed in.  And then he shows up here as well at the 4 minute mark.   Don’t think it’s that funny?  A lot of people do.  So much so that they started a facebook fan club that has gained almost 5000 fans in the last few hours.  It’s called ” The Ginger Kid during Eminem at T in the Park” fan club. 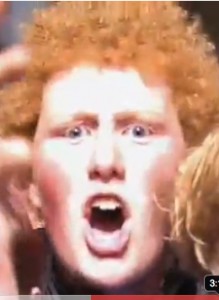 Update:  I found this great quote a few minutes ago about the kid.  “When the Internet comes across a ginger, it’s usually nothing but hatred and scorn. But, when they spotted Robbie Snowden losing his shit and loving life in the crowd at an Eminem concert, they embraced him with open arms.” ~ Buzzfeed.com