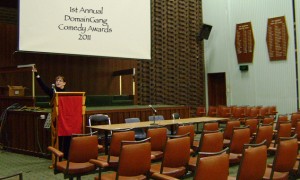 In an ironic twist last evening, DomainGang awarded itself the highly coveted DomainGang Domainer’s Comedy award.  An award that, according to DomainGang, will be given annually to “the site that mixes fictitious comedy, real news, and breaking news in a manner that is not confusing whatsoever”.

The entire Gang from the site was in attendance to accept the award.  Lucious “Guns” Fabrice, Father Domainicus, BullS, and the ever famous Daryl the Drunk Domainer all were present according to site’s owner “Guns” , but unfortunately were not able to be seen because they had “real life Who is privacy”.  When asked what is “real life Whois privacy” Guns, Acro, Theo, responded with, “Have you seen all the people that advertise on my site?  Now ask that question again!”.

When asked to give the keys to the success of the site, Acro responded “I, I mean we, take every day domaining stories and make them funny, real funny.  I take topics that are front page news , sprinkle on a little comedic sugar and a ton of photoshopping, and BAM! comedy that tens of people enjoy” “and the advertisers love it, I mean, look how many I have”

While the attendance was light due to the premier of Dancing With the Stars and a very funny rerun of “It’s Always Sunny in Philadelphia”,  two fans were able to make the event.  Both Howard Neu and Francois Carillo were both able to fly in.  During the post-party sponsored by DnForum, Carrillo was asked about his favorite article from the site.  Carrillo answered “My English not is great so the funny is in the achievement of clicks”

For a first time event it seemed to be a success as both that attended seemed to have a great time.  Acro received a standing ovation during his acceptance speech.  A speech that summed up the evening quite well. “First, I would like to thank my 100% banner at the bottom of each post  for clearing up all confusion on what each article represents.    I would like to thank the mirror for helping me hire new writers. And most of all, I want to let all the people that don’t get my comedy that I still love you despite your feeble closed mind”