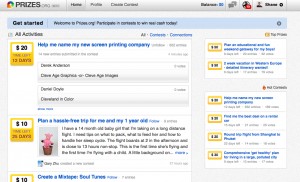 Want to have someone plan you 5 year old’s birthday party?  How about finding you the best deal on a pair of running shoes?  Google is going to try and get that done for you through their new site Prizes.org.

It’s not really anything that hasn’t been done before but their is one big difference.  It’s Google, so there is going to be massive adoption.  After a few minutes it’s pretty obvious that it’s going to do two things.  One, it’s going to allow people to get a lot of things done for them for cheap. Two, it’s going to yet again, drive down the price of services.  Logo makers, designers, and planners are about to take another hit.

My initial feeling is that the layout seems simple now, but when you start getting thousands of contests there is going to be a massive need for organization. Still in beta, there are only a few contests running, with a few getting as many 600 entries.  I think it’s fantastic that you can get 600 ideas for a name of a new company for $10.  People will share their ideas for free so when you start throwing them a little money on the remote chance that someone uses it, the amount of people participating is going to be incredible. The fact that you can use your Facebook or Twitter sign in is going to make it even more popular as it will allow people to share and promote.  Again, nothing new but as I mentioned before, this is Google.

As opposed to some of the other “copycat” attempts by Google, I think this will get traction and be here to stay.  It’s not limited to any one type of need.  You essentially can ask for anything that can be defined and awarded to an individual.  Combine this with Mechanical Turk of Amazon and you really can get any idea and small task you want done.  I’ve stated before I am a huge crowd sourcing fan.  With billions of people on the Internet it’s a shame not to utilize their power.  While people may argue that it devalues services, I have always been in favor of an open market. Let individuals determine the value of a service.  I am the one that has to determine if going with the guy that will do it for $10 will provide me the best results vs. the guy that will do it for $100.  The important thing is I have options.  Prizes.org is going to give you plenty of options when it comes to finding someone to help you get something done.

2 Replies to “Google Officially Opens Up Prizes.Org, Another Crowdsourcing of Services Site”