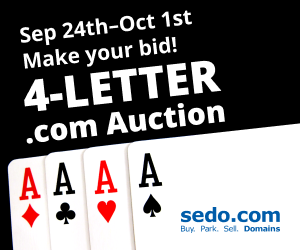 It’s the kind of article that drives me crazy.  Some squatter buys a celebrity or company name, puts a ridiculous price on the name and the media does a story on it.  I’ve stated my opinion on this many times.  If you knowingly buy a name that is a celebrity or a company name and try to make money on the sale of that domain you are squatting.  There are certainly times that it’s not as clear but if you buy ShaquilleOneil.com and try to sell it, you are wrong.  There are a million ways to make money in this field without trying to capitalize on another person’s image or brand.  But the media loves to interview people trying to do it.

Meet Niels Jeffreys of Thailand. Niels bought the domain names Romney-Perry2012.com and Perry-Romney2012.com and has them for sale for $50,000 each. For that price alone he is insane. Add in the fact the domains have 2012 at the end and you have incredibly insane.  But it gets worse because he talks to the reporter.

“I have lost a bundle actually, and they’re the worst investment I’ve ever gotten into,” Jeffreys said. But he said it is hard to resist the temptation to buy more addresses for the chance to score a big payout.

The practice is “essentially gambling,” he said.

When you do it the way Jeffreys is you sure are.  And of course he’s lost a bundle.  He thinks that name is worth $50,000.  Wrong AND stupid.

Dale Kauftiel is a little smarter. He owns RomneyRubio.com.  He’s turned down $100 for the site and would never sell it to an opponent because he is actually fans of the politicians. If they win the ticket he plans on an “open forum for people to discuss the politics of the day.”  True or not, that is a much better approach to holding the domain.

And then there was my favorite quote of the article from Mathew Sanderson, a Washington-based political lawyer. Sanderson suggested ” the Internet Corporation for Assigned Names and Numbers (ICANN), the nonprofit that manages the Web’s address system, should create a new “.pol” top-level domain (as the suffix of a Web address is known) that would be reserved for candidates” He said a new top-level domain for campaigns would help to eliminate the problem of political cybersquatting.

Another person that thinks that a new tld will solve the problem on the dot com.  Couldn’t they give already just give them a dot gov and do the same thing?  The whole article is just brilliance in action.

Here’s the whole article for you to peruse.

One Reply to “Great. Another Article On CyberSquatters Buying Up Political Domain Names”