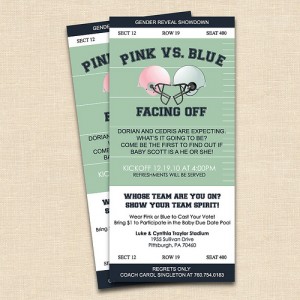 I’m not sure how it came to me.  It’s a trend that is exploding.  An event that women everywhere are spending an amazing amount of time and money to prepare for.  Now becoming as popular as a wedding and bridal showers.  And something I had never heard of in my life and today I heard about it from 3 different people going to three separate events of this nature.

Last night my wife was the final catalyst.  She told me that she couldn’t believe what a big deal women were making about revealing the gender of their babies.   They were having big parties all built around the announcement of the sex of their unborn child.  A friend of my wife even had the gender put on a card and baked into a cake.  Eventually one person would get the piece of cake and reveal the sex of the baby or choke on the piece of paper, which ever came first.  Either way it was going to be exciting.  A girl at work joked she was going to be a little late for the next day because she was going to a Gender Reveal Party.  It was the second time I had heard of these new parties and I could think of was how weird the name was.  That was until my wife said it again.  But this time I was in front of a computer with Google and Godaddy sitting right in front of me.

Immediately I typed it in Google to see if anyone else called it a “Gender Reveal Party”.  I was amazed, millions of articles discussing it.  Eight dollars later I am the proud owner of GenderRevealParty.com. If you use a tool like estibot and valuate you’ll find there are not a lot of searches (none)  but this is a very new phenomenon.  It’s really only started to explode over the last 12 months.  I’m sure people have been doing things like this forever but it seems lately new mothers are starting to try and outdo each other for each reveal. When people try and outdo each other that means two things.  One, they are looking for new ideas and two, they are going to try and outspend their friends.

Who knew it.  I would be the king of the Gender Reveal Parties.  I am already thinking of creative ways to reveal the sex.  My first reveal is having all the girls over to watch a football game and then suddenly Chad Ochocinco scores a touchdown, takes off his shirt,  and he has “It’s A Boy” carved into his chest hair.  Can’t wait to see the girls top that one.