Posted on November 2, 2010 by ShaneCultra 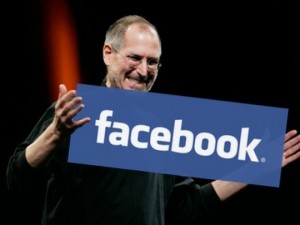 It all started with the meeting between Zuckerberg and Jobs the other day.  The media wrote the story as simply a meeting between two owners to discuss Apple’s new project Ping.  I think it’s much more than that.

Apple has $51 Billion dollars in cash sitting in the bank. Do you know what $51 billion can buy you?  Anything you want.  Facebook stock currently values the company at $33 billion but my guess the final price would be in the $30 to 40 billion dollar range.  So why in the world would they blow their cash?

There are many reasons.  First, they are generating $22 million A DAY in earnings to put in the coffer.  Two, the cash is a drag on earnings.  They actually have too much cash and it’s gotten so large it actually dilutes the earnings to a point it drags down the stock price.  How do you give a P/E to cash?  Eighteen percent of the company’s value is in cash.

So what can they do with all this money?  They can do three things.  Buy something. Buy back stock ie invest in themselves. Give it away ie a dividend.  Let’s start with number three.  Steve Jobs has always been on record that he’s not going to pay a dividend.  They could always change their minds but I don’t see this happening. Buying back stock seems like a great move to me.   I’ve always felt in any business, there is not better investment than in yourself.  Apple has billions to invest and they should invest it by buying back stock.  But really they don’t have to. They are the second largest company in the world and when you get to that level how much further do you need to take it.  That takes us to point three.  Who do you buy?

The oil companies, GE, and the other huge companies with tons of cash can buy other competitors and make themselves larger or more vertically integrated.  GE is so massive they just keep adding new companies under their wings.  They have so many divisions they can essentially buy anything and have it fit into some category.  This won’t work for Apple .  They don’t really want to buy a content provider.  They provide better content delivery than anyone out there.  They don’t need the content.  There’s no point in buying an electronics firm.  Anything they want to make they can do it themselves, they don’t need someone else.  There are plenty of other small companies out there that could add some little piece of the puzzle to Apple’s technology but when it comes to buying something that fits into what Apple is trying to do, there is one big buy that can make it happen,  Facebook. The largest online content/people management site on the net next to Google.

They can easily afford it and it’s is the best content delivery business on the Internet.  A nice little package of every person on the Internet all rolled into one.  A package that would allow Apple to put all their devices and content delivery right in the user’s lap.  Secondly, Google would shit a brick.  Presently, there are only three worlds on the Internet.  Google, Facebook, and Twitter.  Twitter is a couple steps down from the first two.  If Apple owned Facebook it could easily match Google in terms of breath and scope on the net.  Finally, it would also be purchasing a company that is already making money yet still has a nice growth curve.

Because Facebook is privately held it’s impossible to know exactly how much revenue they bring in but the low end is being reported at roughly 1 billion dollars.  All sources say they are cash flow positive and profitable.  It would hard to not be profitable with a billion dollars revenue and 1000 employees.  Even more important,  Facebook provided 13 percent of all traffic to websites (2009 data)  vs Google’s 7%.  I’m sure it’s grown since then.

If Apple wants to buy the Internet with their extra cash now is the time.  BEFORE Facebook goes public. Before a competitor does.  I think Apple is contemplating the purchase right now.  I have an email into Steve asking him if he’s buying Facebook as we speak.  I’ll let you know what he says.  Of course he and I had a falling out back in the 80’s when I told him his NeXt cubes were too expensive and he hasn’t talked to me since.

16 Replies to “I Think Apple Is Going to Buy Facebook”