Posted on November 3, 2010 by ShaneCultra

I love a good laugh and there have been some great ones with the DomainStryker-Epik battle going on lately.  It’s been great for Francois and Domaining.com because both of them have been forced to spend some money to combat the other’s war of words.  Today’s from Mike was my favorite.  He threw Andrew (Mr. Switzerland) into the mix. I’m not saying he’s right or wrong but I realize I would rather have Mike on my team than against me because he’s vicious.  He had me all the way though the post until I got to this last comment and then…….well….I just laughed when I got to the “retarted” in all caps.  The irony was too much.  It showed a little background of the two people fighting.  The popular, highly intelligent Rob vs. the street guy Mike who may have not had the best grades in school but is hard working, brash, doesn’t care what people think and knows how to make money. 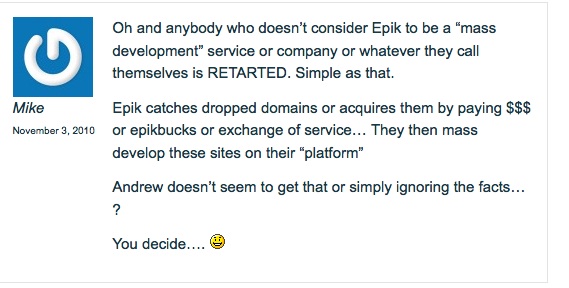