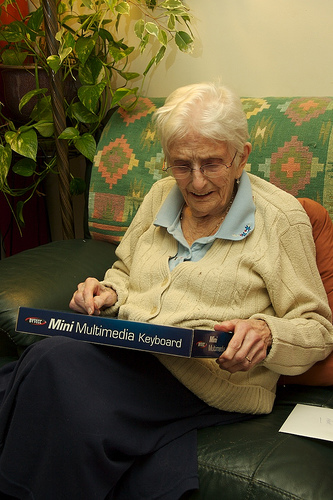 Looks like you’ve just received an email from Grandma showing you the latest video of a dancing dog.  You know Grandma, she’s the lady that gave you a check for your Birthday for $1.17.  You know her, she’s the one with the 1985 Buick with 28,000 miles on it. Well she’s on the Internet and she’s now only 3 months behind current technology.

The older generation is starting to catch up.  Their first adoption was the cell phone. Sure they had bag phones just a little longer that the rest of it but eventually they cut the cord.  Then they got AOL.  Yeah, they stayed on it 10 years longer than the average person but it was tough to give up her vanity email,  [email protected] after having it so long. And now they surf the web.

Grandma loves the web.  There is so much to read and do.  Printing out crosswords, searching to see which state old friends moved to, Florida or Arizona, and of course, sending emails of Internet memes that were popular 6 months ago to everyone she knows and not blind carbon copying any of the names. But I’ve noticed one thing, Grandma is catching up quickly and loves to surf the web.

Guess what else Grandma is doing, clicking ads.  You ever wonder who in hell is clicking these ads on your site?  It’s Grandma.  The very young and the “more mature” are much more likely to click ads.  According to Dave Morgan of Media Post

Ninety-nine percent of Web users do not click on ads on a monthly basis. Of the 1% that do, most only click once a month. Less than two tenths of one percent click more often. That tiny percentage makes up the vast majority of banner ad clicks.

Who are these “heavy clickers”? They are predominantly female, indexing at a rate almost double the male population. They are older. They are predominantly Midwesterners, with some concentrations in Mid-Atlantic States and in New England. What kinds of content do they like to view when they are on the Web? Not surprisingly, they look at sweepstakes far more than any other kind of content. Yes, these are the same people that tend to open direct mail and love to talk to telemarketers.

In other words, Grandma.  She has no problem clicking on ads if it interests her.  When she wants to buy something and thinks an ad will lead to that buy one get one free bundle of yarn, she’s gonna click.   She’s not going to do online banking, she’s probably not going to order a pair of walking shoes from REI, and she’s certainly not consolidating her debt.   If she’s going to purchase anything it’s most likely a $15 ITunes card that was on your cousin Billy’s Christmas list.  It only took 3 hours to buy and she actually read the TOS and User Agreement from start to finish on the Apple site.  But she did it and now that she’s seen how nice the iPod is, she’s bound and determined to win one on one of these online sweepstakes.

So next time you have a site idea, think of your Grandma. What kind of site would she like?  Build it and she will come.  It’s going to take her a little while to get there but she’ll come.