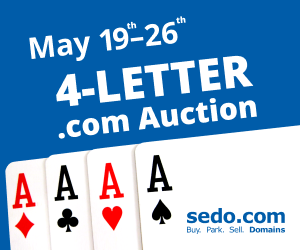 There are many things in this world that are fully obvious and we acknowledge personally yet leave it alone in public.  It’s either just not that big of a deal or nobody wants to ruffle feathers.  I on the other hand, like to say what I’m thinking.  Usually I’m pretty on but half the time I should have just kept my mouth shut and let it be.  We’ll see if these observations have the same ratio.

1.  A high percentage of domainers still squat on other people’s traffic or name.  It may not always be a flat out trademark squat but I’m always amazed how many people register the dot net or other tld of a popular dot com or a plural version or something of this nature. Celebrity names and tv shows are still big ones as well.  I am not judging or saying it’s wrong, just saying it still happens quite often.  I will say that the failure of .cm does say that there is a line that takes it too far and that was it.

2.  There are only about 5 domain blogs that have any original thought.  Not counting the sites that are supposed to be domain news sites, the rest must be struggling with time or writers block.   Michael Berkens’  The Domains is the best when it comes to original thought….and the worst is…..you don’t think I’m that stupid do you? Don’t answer that

3.  Nobody wants to upset Francois.  He’s helped so many of us bloggers out by providing traffic that some business decisions have been made just to avoid pissing him off and losing the traffic. Traffic is what our advertisers pay for and every little bit helps.  I’ve seen bloggers say that domaining.com  provides a small percentage of their traffic and they don’t care but I’m pretty sure they do, or they’re foolish if they don’t.

4. Sahar and Jarred of Bido are some of the hardest working business people I know but they are junk dealers and I don’t mean that in a bad way.  It’s like a scrap yard that makes their money by buying and selling in bulk.  Occasionally, something very valuable will pass through but most of the time it’s common product.  People that are looking for nice things don’t stop by but it works for people looking for a bargain or something lower end.  Again, it’s not for lack of effort and if business success was determined by hard work and likeability then Bido would be a fortune 500 company.

5. DomainGang proves that comedy is in the beholder and many times just in the eye of the writer.   I know, I know they are sponsored by Domain Tools and Howard Neu loves them but they single handedly have proven that it’s almost impossible to do domaining comedy every day.  I love the effor and there certainly is a lot of good stuff there but there are also some head scratchers .  Is it me or do other people not know if certain stories are supposed to be humor or a regular story?  He and I both love ChatRoulette so we’ll always share that

6. Most people don’t make money in domaining and seem to have a 1 to 20 ratio of good to junk domains.  I’m completely amazed how many shitty names are owned by people.  I’m not going to say that all my names are great but they are certainly better than half the names I get offered.  I put up a few “wanted” ads on the forums and I was inundated with one junk name after another with outrageous prices attached.  If you have to explain why a domain is valuable and the explanation doesn’t involve traffic or money then it’s not quite as valuable as you think.

8. Advertising dollars and spending on the Internet is growing by leaps and bounds and domainers, for the most part, are leaving it on the table by using the same methods that were used 5 and 10 years ago to monetize their domains.

9. The domain industry is heavily reliant on Sedo.  We use them not only to buy and sell domains but to determine value.  They are the heart and soul of the domain industry. Sure there are other very important players like namejet, snapnames, and godaddy but the open market model of Sedo makes it stand alone.

10.  People LOVE the big sales.   Nothing makes domainers more excited than to hear a story about a huge flip of a domain.  It’s what keeps us buying.  That 5K to 100K flip.  That quick doubling of money. The hand reg sold for 10K.  We live for that stuff.  It’s one in a million but almost all of us think that one could be us.  I make most of my money in domaining of the fact that human nature makes us think that we can sell that name for more…do better.  As long as I can get someone to think that it’s worth more than I paid for it, I’m happy. Who am I to ruin someone’s dream?