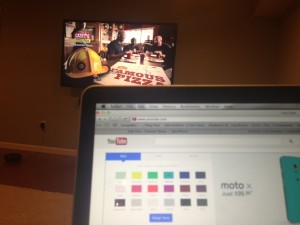 I have always looked at a domain name as a marketing cost.  I do this because essentially a domain is a marketing tool that delivers a customer to your business and makes a visual and mental impact.  A domain is just one part of the puzzle of getting customers to spend their money with your business.   Like McDonalds.com or ImLovinIt.com, good domains stay in the mind of consumer.  So often companies spend millions of dollars on marketing costs only to have potential customers lost because they tried to save $5,000 rather than getting the domain that will have the best impact.  If you compare the cost of marketing it’s easy to validate $100,000 on a great domain for merely one ad campaign.  It’s less than a cost of a 30 second ad on national TV.  Here are some examples of other costs of marketing as compared to a domain.

Billboard Campaign:   Let’s start with the cost of the printing itself.  It costs roughly $500 for each board.  They can now be reused several times but each unique campaign will cost you $500.   The cost of the rental of the board will start at $1500 PER MONTH.  If you want to go with digital boards where you don’t have to pay for the printing starts at $3500.  The sales people will remind you that you can change the message as many times as you want for only 2.5 times the cost of a standard board.  And those are starting prices and are for towns of 100,000 or less.  Want a billboard in a large city?  It’s going to cost you $10,000 and up per month.  A memorable domain is the most important part of the billboard.  Nobody is going to remember the telephone number.  Those are so 1980.  You need a great domain name.  Spending just 5% on a domain for the campaign still justifies $50K. Total Cost for national campaign for one year:  Millions

TV Campaign:  If you want a 30 second ad on a network television program expect to pay $100,000 or more.  You like Two Broke Girls?  That will cost you $270,000 for 30 seconds.  One time, thirty seconds, $270K.   A national campaign on television is in the millions.  Add in another half million to hire your ad agency, your talent, and the production of the commercial.   The same goes here.  You’ll get roughly 5 seconds to display your domain.  You better make it good.  Why spend millions on ads and let Google determine who goes to your site? Here’s a list of cost of a tv commercial by show from last year.  Makes a domain look cheap doesn’t it?

Radio Campaign:  A radio spot in a a local drive time market is roughly $50 to $150 for a 30 second spot.  That is PER CITY.  If you want a national campaign you either have to advertise in hundreds of cities or you advertise on a syndicated show that is in all the major markets.  A radio market like sports has ESPN that reaches most markets but the price of these commercials is basically a sum of the local rates of all the markets minus a small discount.  Carry all that out and you’ll see that one national radio ad will be $10,000 or more with most being in the $30,000 rate.  I remember back in 2005 a live read from Howard Stern was in the $30,000 range.  And again this is for ONE ad.  National Campaign Cost:  Starts at $500,000

As you can see, the cost of marketing for a national company is expensive.   There are those that have “trouble” paying someone tens or hundreds of thousands of dollars to a person that didn’t help the company achieve anything other than selling them a domain.  But making money isn’t personal.  If a better domain can help you make money then it merely becomes part of the cost of a marketing plan, regardless of who owned the domain before.  To not budget or plan for a great domain is leaving potential customers in the hands of Google.  Every time you take out the middle man that guides customer to your business ,you are saving money.  A memorable domain leads directly to your company.  Information that must be searched takes them on a journey that can distract or mislead.  If you run an Adwords campaign it could also cost.

So the next time you sell your domain, keep in mind the other costs of marketing.  Keep in mind you’ve taken the risk of putting your money into an asset that others thought may have no value.  Remind them that they are getting an incredible marketing tool for less than all the other ways they are going to promote their company.  They are getting a great deal no matter what they paid.

14 Replies to “You’re Selling Too Cheap: The Cost of a Domain Name Vs. Other Marketing Cost”